A couple of high flyers from the Lower 48 have been cleared for takeoff in the Alaska Airlines Classic.

The Classic tips off Thursday at West High and continues its tradition dating to 1989 of bringing must-see talent to Anchorage to face Alaska’s best high school teams.

After COVID canceled the Classic in 2021, the state’s premier prep hoops tournament is back with a loaded field.

“I’m excited to see how some of Alaska’s best measure up,” said Demietrius Preston of WeGotNextt. “The Classic always attracts big-name talent, and this year has plenty of dope storylines.” 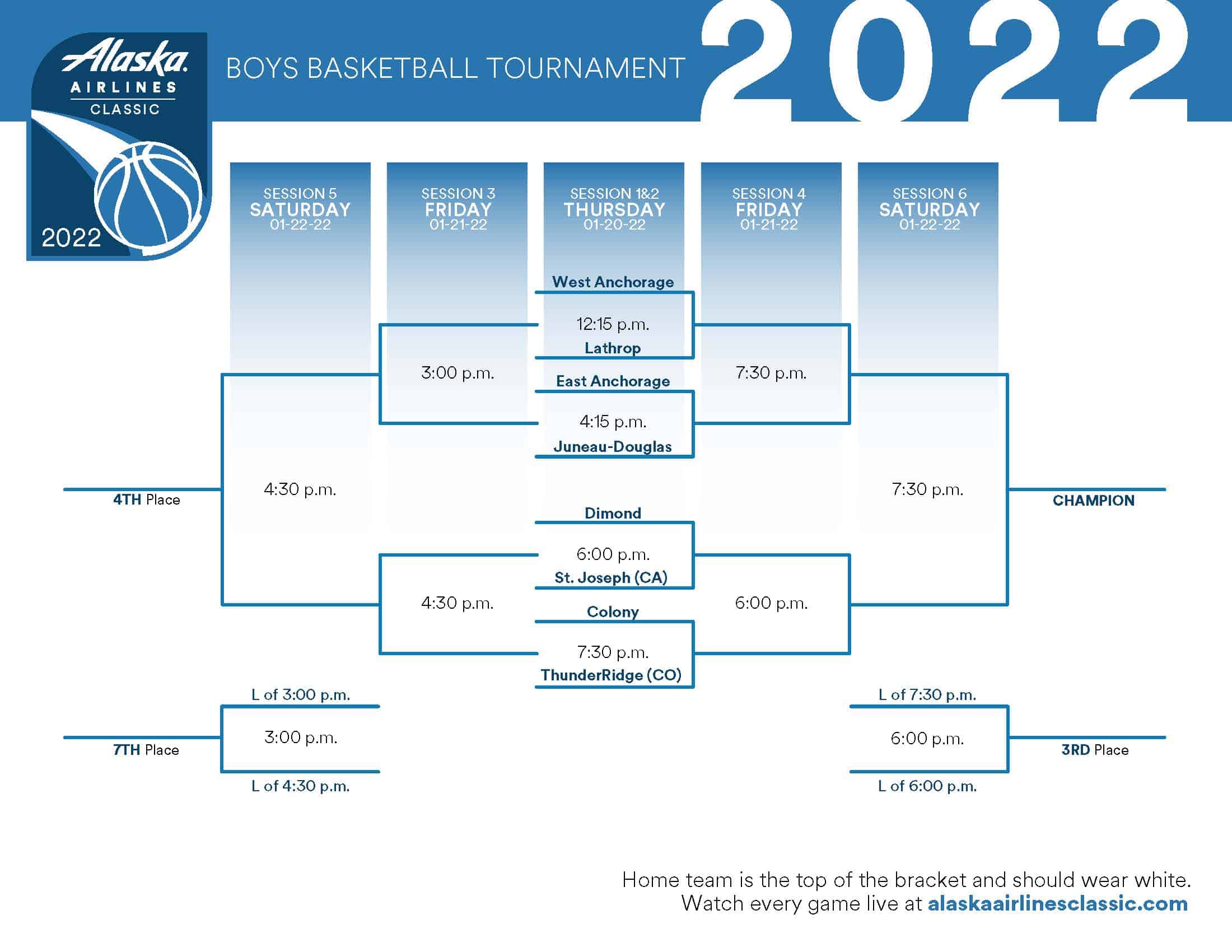 The T-birds are flying high with their longest winning streak since another head coach named Chuck sat on the East bench.

Coach Chuck Martin helped restore East to the top of Alaska’s high school hoops hierarchy. The No. 1-ranked T-birds are 71-9 since Martin took over in 2019.

Led by its hallmark press defense, East has allowed just 37.8 points per game this season.

“We play with extreme pace and great defense,” Zimmerman said. “We don’t worry about offense too much because we can get stops and turn them into easy points.

“But don’t get us fooled; we have some talented scorers, too.”

Damarion Delaney leads East in scoring at 15.7 points, followed by Daion Doughty at 12.6 and Elijah Reed at 11.1.

“I think we are a favorite because we play together and we play hard all the time,” Zimmerman said.

The East program has played a key role in Classic history, with former coach Chuck White leading the T-birds to Alaska’s first Classic title in 1992 behind future NBA player Trajan Langdon, the Classic’s only two-time MVP.

Back in the tournament’s heyday between 1989 and 1995 when nationally ranked competition regularly made the trek here, Alaska teams won 11 games over those seven years, with White leading East to 10 of those victories.

Which coach had the other win?

None other than Martin, who led Colony to a 68-65 over Lexington Catholic of Kentucky in 1993.

Over the years, the Classic has built a rich history, boasting 11 McDonald’s All-Americans and eight future NBA players. From Jeff McInnis and Scot Pollard to Terrence Rencher and Tremaine Fowlkes to Daishen Nix and Langdon.

It’s always been a star-studded event and this year is no different. The tournament is stacked with tremendous talent.

Keller might be the best of the bunch. The 6-foot-9 senior is the No. 1-ranked player in the state of Colorado and will play his college ball at Wake Forest in the mighty Atlantic Coast Conference.

“Great athlete with the full package of skills,” said ThunderRidge head coach Joseph Ortiz. “We need him to set the tone. He plays center but really is an inside-out player.”

Keller is a body snatcher around the rim, looking for victims to put on a poster.

Keller has racked up four double-doubles this season while averaging 18.3 points, 7.0 rebounds and 1.8 blocked shots.

The fabulous forward draws most of the attention, but don’t sleep on 6-foot-3 senior Jackson Brennan, who is pouring in 17.1 points per game for ThunderRidge.

“He does whatever it takes,” Ortiz said. “He can score 30 in any game but you wouldn’t describe him as a shooter only. Just very crafty.”

Ortiz has been at ThunderRidge since 1997 when the school opened its doors. He owns a 463-138 career record in 23 seasons, winning three state championships and making seven appearances in the title game.

This will be the school’s first trip to the Classic.

“I think seeing Anchorage and coming to Alaska is pretty exciting,” Ortiz said. “First-time trip for almost everybody in our program. We’re excited for all of it.”

Another Classic first-timer is St. Joseph, which is ranked No. 15 in the state of California by calhisports.com.

The Knights are an up-tempo squad that likes to get out in transition and wear down opponents. They score an average of 74.7 points per game and have reached 82 or more seven times.

“In California, we play with a 35-second shot clock, and it rarely comes into play,” said St. Joseph coach Tom Mott.

The Knights play fast, and they play above the rim, earning the nickname ‘Dunk City.’

Yessoufou (pronounced yes-o-foo) leads the way with 48 of the team’s 80 dunks. The 6-foot-5 freshman manchild is a destructive force around the rim. No backboard is safe.

He actually broke a backboard in a game earlier this season.

Yessoufou is a walking double-double as he’s averaging 28.7 points, 12.2 rebounds and 3.4 dunks per game.

“He’s one of the top freshmen in the nation,” Mott said.

St. Joseph’s backcourt features a dazzling duo of 6-foot-3 senior Dre Roman and 6-foot-5 junior Luis Martin – both ranked among the top 50 players in the state of California.

Marin is averaging 11.2 points, 7.1 rebounds and 5.6 assists. Last summer, he played for the Puerto Rico squad that competed at the FIBA U16 Americas Championship and averaged 8.8 points and 3.8 assists in 22.4 minutes.

In addition to East, Colony (8-1) and Dimond (8-2) are strong Alaska teams that have enjoyed success at the Classic.

Colony coach Thomas Berg led the Knights to the 2019 title – just the fourth Alaska team to win the tournament.

Colony has won a bunch of games by blowout and one at the buzzer. The team features 6-foot-1 sophomore Jayce Underwood, one of the rising stars in Alaska.

“Young Jayce has a chance to be one of the best point guards to ever come out of the Valley,” said Preston, who has covered Alaska hoops for 15 years. “Colony has some solid pieces, but he is the key.”

Dimond features 6-foot-2 junior Luke Johnston, a slasher and shooter who was named MVP of the Alaska Prep Shootout two weeks ago.

Dimond also features a young bull in 6-foot-1 freshman Marek Hajdukovich, who pumped in a season-high 27 points earlier this season.

Juneau has played in the Classic a half dozen times, the first coming all the way back in 1991 when the Crimson Bears took on seventh-ranked Oak Hill in the first round.

Juneau will face another tall order Thursday against top-ranked East in a matchup between the two most successful championship programs in ASAA state tournament history. East ranks No. 1 all-time with 16 state titles and Juneau is No. 2 with 12.

“We don’t often get the chance to play them during the regular season so this is an opportunity we’re looking forward to,” said Juneau coach Robert Casperson.

Juneau is one of the few Alaska teams that has already faced Lower 48 competition after going 1-3 against teams from Nevada at the Tarkanian Classic in Las Vegas.

“We were able to see a lot of different styles in Vegas, which was a real eye opener for our players,” Casperson said. “We realized that we need to execute our style, as best we can, no matter who the opponent is at the time.”

The Classic runs Thursday through Saturday.